The Alterna Cup to be Decided Tonight 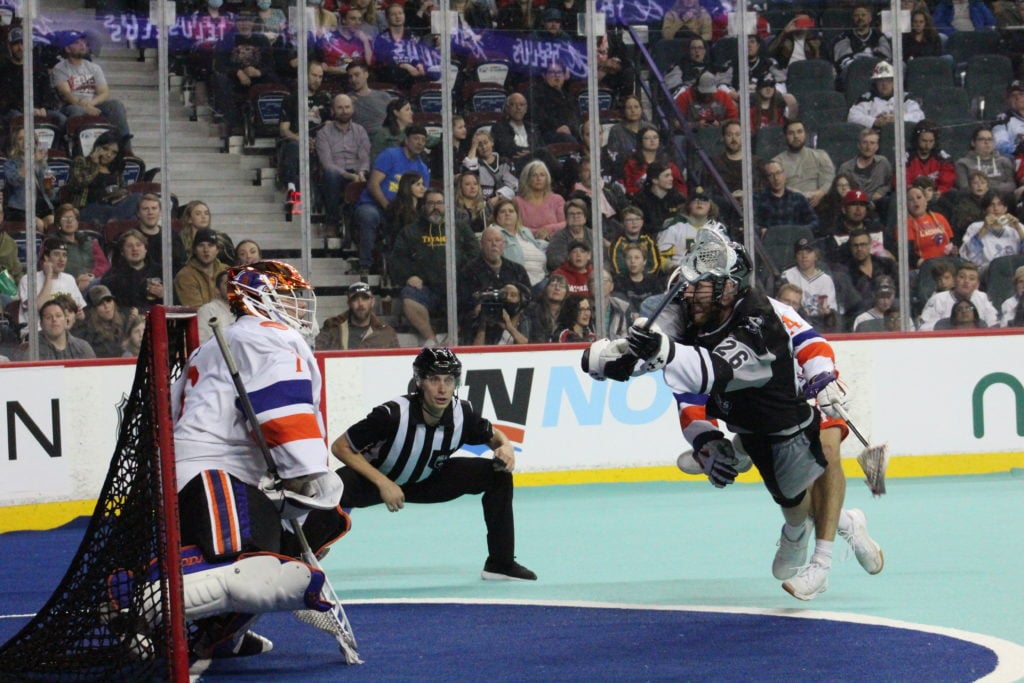 Tom “Captain America” Schreiber and the 11-5 Toronto Rock (-1.5; O/U 22.5) host Graeme “Cyborg” Hossack and the 9-6 Halifax Thunderbirds in a crucial East Conference clash at FirstOntario Centre on Saturday in the Sports Interaction Game of the Week on TSN3 (7pm ET/ESPN+).

Schreiber and the Rock can simultaneously clinch a home playoff date and spoil the Thunderbirds’ second attempt at clinching the all-Canadian Alterna Cup with a win against Halifax on Saturday.

“Home-floor advantage is certainly something we are after,” says Schreiber, the league’s 2017 Rookie of the Year who is tied for this season’s goal-scoring lead with 41 goals in 14 games. “Our fans have been amazing all year. We would love to play in front of them come playoff time.”

Last weekend it was Calgary Roughnecks captain Curtis “Superman” Dickson living up to his superhero nickname with 8 goals and 14 points in games against Halifax and Panther City, including a six-goal sock trick against Panther City.

Calgary will capture the Alterna Cup with a Toronto win/Halifax loss. Halifax needs the win, and then some help later on Saturday from Vancouver to defeat Calgary, to come out on top with the inaugural maple leaf trophy.

The Rock are 0-2 against the Thunderbirds this season, both losses coming early on in December (11-7 road loss) and January (14-13 setback in OT at home) as part of a 3-3 start to the season. Schreiber scored five goals in the two losses to Halifax.

Since then Toronto has gone 8-2 including winning three straight and five of their past six games.

“We are focused on peaking at the right time,” Schreiber says. “We have been taking a week-by-week approach. We’ve done a nice job of handling adversity [and] finding ways to win games even if we are not at our best. We’re focused on playing our game and executing to the best of our ability. It starts with hustle and playing as a team.”

Hossack, the NLL’s three-time reigning Defensive Player of the Year, and the Thunderbirds are looking to slow down Schreiber and the Rock despite losing last week at Calgary and dropping five of their past six games.

“This weekend is another opportunity to prove to ourselves what we’re capable of and get back into the win column,” says Hossack, who has two goals (one short-handed), 11 points, 110 loose balls and 12 forced turnovers in 15 games this season. “All we can focus on right now is what we can control.

“Overall we still have a strong record. Five losses from the past six games doesn’t sound the best, but the NLL is a league where any team can win on any given weekend. We have been overthinking the past few games because of the previous losses, rather than just playing our game and trusting our instincts.”

Hossack hopes he and his Halifax teammates can draw on their experiences from earlier wins over Toronto.

“We started the season out with a lot of confidence, which I think is important for beating a team like Toronto,” Hossack says. “They’re a strong team that is playing very well right now. We just need to work hard and trust our systems and get back to playing Thunderbirds lacrosse again. This weekend versus Toronto is a chance to gain some confidence back leading into the playoffs.”

Schreiber, meanwhile, is looking for his Rock to get on a roll offensively. Toronto, with the league’s best home power-play at 52.6 percent, is scoring 11.38 goals per game. The Rock are also the NLL’s best defensive team, giving up only 9.50 goals per game.

“We struggled to find our rhythm on offence last week. We are looking to get back on track,” says Schreiber, who attributes this season’s goal-scoring prowess to: “A lot of support from our staff. We’ve done a lot of film work and prep this season. It’s been a massive help for me.”

Halifax’s defence led by Hossack isn’t too shabby either, fourth best in the league, giving up 10.47 goals per game.

“Our goal as a defence is to be as consistent as possible,” Hossack says. “We want to limit teams’ shots and trust our offence to do their thing. I think it will take a full team effort, defence and offence, to win a championship.”

Saturday is Indigenous Heritage Night at FirstOntario Centre in Hamilton, and the Rock will be wearing special alternate jerseys, shorts, helmets and other gear to celebrate the Creator’s Game and the area’s unique connection to the game of lacrosse. Fans can bid on the items here.

Toronto has also donned black-and-gold Hamilton-inspired Steel City jerseys this season for their home in Hamilton.

The Thunderbirds debuted alternate orange Every Child Matters jerseys in their season opener and have worn ECM shoulder patches and helmet stickers all season to honour and remember those who suffered through the residential school system, including owner Curt Styres mother, who passed away earlier this season.