The Toronto Rock were at a crossroads following the 2016 National Lacrosse League season. This perennial contending franchise finished last in the East Division, saw captain Colin Doyle and Josh Sanderson retire, and faced injuries to its roster.

Owner, President, and GM Jamie Dawick would not stand for a losing culture and knew that he needed to immediately inject his lineup with difference makers to get the Rock back into championship contention. But where would he find them?

Building through the draft was an obvious step and Toronto selected five newcomers. What about free agency? This is where Dawick and the organization got creative. 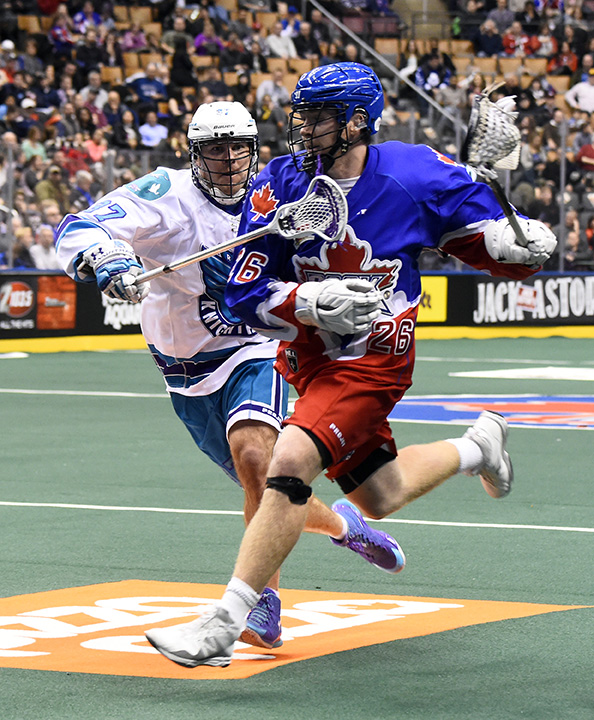 There was an untapped pool of incredibly talented U.S. born field lacrosse athletes that were stars at the professional and/or collegiate levels who had never played the indoor game. A handful of Americans over the NLL’s 30-year history, like legends Casey Powell and Paul Rabil, made the successful transition, but doing so with no box experience was rare.

Nonetheless, it was a low risk/high reward idea that was worth exploring. Rock management leaned on new captain Brodie Merrill, a Canadian that also plays in the pro field league Major League Lacrosse (MLL), and the recently retired Josh Sanderson to hunt for possibilities.

“The American Experiment” had begun.

In the club’s press release Dawick said, “Tom and Kieran are world class players with an interest in playing the indoor game. They are both highly skilled offensive players with as much talent as anyone. They have made a commitment to investing the time to get ready for our training camp and have an opportunity to make our club.”

Schreiber never really considered the NLL until he received a voicemail one day from Josh Sanderson. ‘’Josh reached out first and gave me some background on the Rock and the league. The next day owner Jamie Dawick called, and the day after that Brodie (Merrill) was on the phone. So I knew they were interested! (laughs)’’

McArdle’s introduction to the Rock was similar to that of his now teammate:

Kieran may not have suited up as an indoor player, but he did have exposure as a fan of the National Lacrosse League. He remembered, ‘’growing up on Long Island (NY), I would go and watch the NLL’s New York Saints and found it to be a cool style of lacrosse that I wasn’t used to playing.’’

The potential was certainly there, but out of all the exceptional American field players why Schreiber and McArdle specifically? Brodie Merrill explained:

The recruitment of the two 24-year old New York state natives was complete. Next step – showing up to camp. Schreiber didn’t have his hopes set high, ‘’I had zero expectations of myself coming in. From what I heard and saw from other American field players trying the NLL was that the experience and try out was valuable, but nothing developed out of it.’’

However, both were ready for the challenge and Toronto head coach Matt Sawyer saw that he had something special right away:

(Part Two of ”The American Experiment” will be released on NLL.com Wednesday morning)

Andy
McNamara has been a play-by-play commentator for the NLL on TSN, NLLTV.com, and world lacrosse tournaments since 2011. He’s also a sport talk host and anchor on TSN 1050 sports radio. Follow Andy on twitter @AndyMc81.