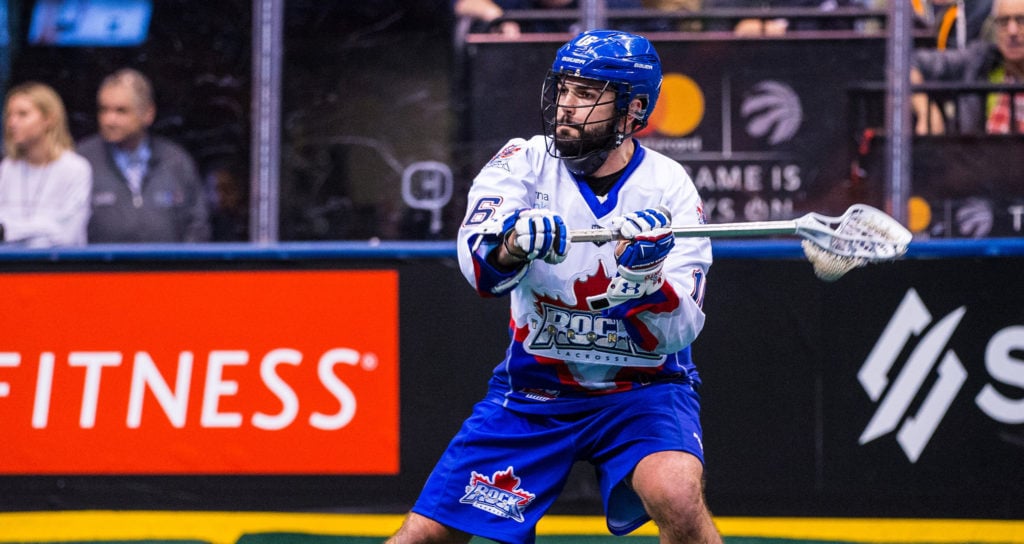 On a night which should have been uplifting and exciting for the thousands of fans packed inside the Air Canada Centre in Toronto, it slowly became a disappointing and frustrating evening for Rock fans.

“Nobody’s happy with the night we had.” Sawyer said post-game. “We weren’t good enough to  play against a team like that and come out with a win. We need to get better as individuals and get everyone performing at the best and right now we’re not. It’s not a happy room, it’s not a happy time right now but this is the group that has to pull ourselves out of it.”

From the onset, the Rock shot themselves in the foot and were out-matched by the visiting Saskatchewan Rush. Brad Kri committed a cross-checking penalty within the first minute of the game, a mistake that would cost them a goal and the opening lead just 64 seconds later off the stick of Ben McIntosh. Only seven seconds after that, the Rush would double their lead following a face-off win and some nifty passing that was finished off by Curtis Knight who put it in the net.

Newcomer and former Rush forward, Adam Jones, scored the Rock’s first goal (his 2nd of the season) as he flew over the crease and put it past Rush goalie, Evan Kirk, to bring the team within one. It was an encouraging sign to see the dynamic goal scorer make such an impact so early into his first home game. However, each time the Rock tried to fight their way into the game, the Rush would answer with a goal or goals of their own.

Heading into the 2nd period, the Rush were up 5-3. The Rock’s third goal of the night was an important one for Brett Hickey who notched his 200th point of his career. Hickey single-handedly tried to carry the load in the 2nd with two more goals to give him a 1st half hat trick. Rock players not named Hickey, though, had few answers for Kirk who would allow only three more goals while stopping 15 -he would finish the half with a total of 22 saves and 6 goals allowed.

The Rock were looking for that type of outing from their goalie, Nick Rose, but, like the rest of the team -minus Hickey- it wasn’t his night. He let in nine goals while recording just 24 saves and was eventually pulled for Brandon Miller in the later part of the 2nd quarter.

“He didn’t get much support there early on.” Sawyer said of his starting keeper. “I thought there was a couple he could have had but if you go back and look, a lot of their shots were clean looks and right on top of him [Rose].”

Following the switch in goal, not much changed for the Rock. The Rush kept pounding the ball on net and would score four goals a piece on Miller in the 3rd and 4th quarters. On the offensive side of the ball, the Rock went silent in the 2nd half scoring just three times. The home side was outscored in every quarter of this game after being outscored in three quarters last weekend in Buffalo against the Bandits.

It wasn’t that the Rock didn’t make the effort -they took 48 shots on the night- they just weren’t able to capitalize on key power play opportunities or go on many runs. The only time the Rock scored consecutive goals was their opening tallies to tie the game at 2-2. And when they had a man up, the Rock went one for three in each half.

In Buffalo, the Rock also struggled on the power play finishing just three of seven opportunities. With a power play of 5-13 through two games, the Rock have the 2nd-worst power play percentage on the young season at 38%. Coming into tonight, Toronto were also the worst in killing the power play sitting with a 40% success rate. Tonight they couldn’t stop four of five of the Rush’s power plays and also let in two more goals when playing on a man-down penalty delay.

The Rock’s frustration came to a boil with the Rock down 8-14 halfway through the 4th when the Rock’s Billy Hostrawser and the Rush’s Mike Messenger threw down the gloves and wailed on each other for nearly a minute. Once the two were separated and they were escorted to their respected penalty boxes, the crowd cheered their gritty defenseman who had drawn blood above Messenger’s eye with one of his haymakers.

As the final buzzer sounded, the Rock would see themselves defeated by the score 17-9. The Rock now have a bye week to work on all of their shortcoming from their first two games before they hit the floor again inside the Air Canada Centre for their second matchup this year versus the Buffalo Bandits on December 30th at 7:00 PM EST.