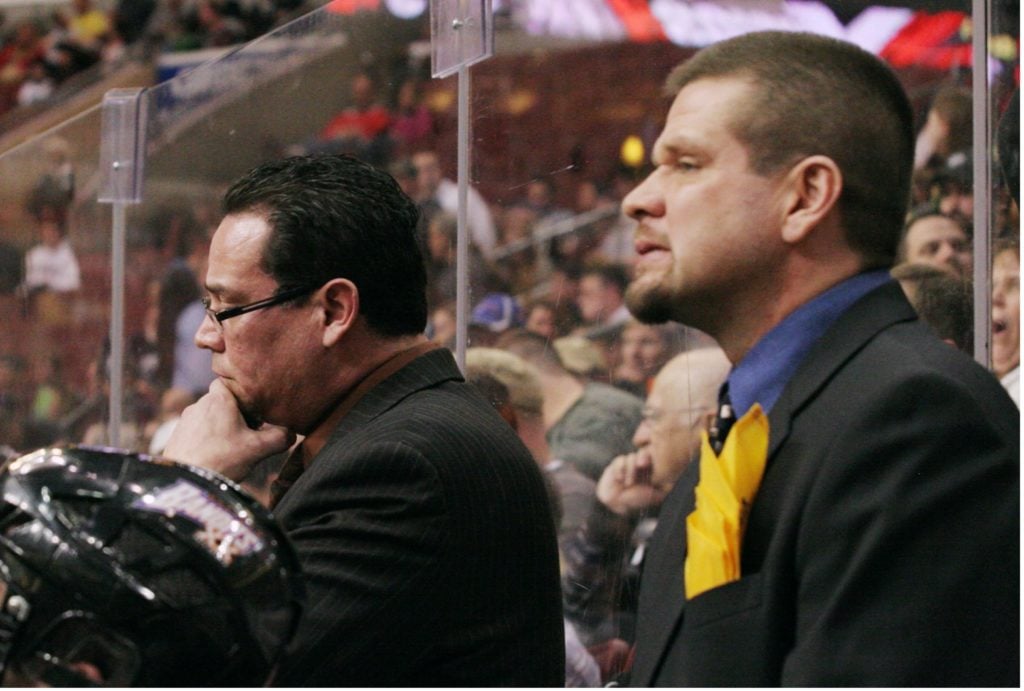 Many Indigenous children are introduced to lacrosse at an age at which the meaning of the game, and how it’s played, is incomprehensible. Yet, as the years pass, the game’s rich history, traditions and rules will become second nature to them. You will often hear some version of this adage from experienced Indigenous lacrosse players: “I’ve had a lacrosse stick in my hands for as long as I can remember.”

That line had more than one meaning for brothers Rich and Darris Kilgour, who grew up on the Tuscarora Nation Reservation in upstate New York.

Throughout the 1970’s and ’80s, the opportunities to play organized lacrosse, particularly box lacrosse, on this reservation were few and far between. By some accounts, this is still true today. However, for the Kilgour’s, lacrosse still managed to be a family affair.

You see, the Kilgour’s grew up no more than 150 yards away from Tuskewe Krafts, a famed and legendary Indigenous crafts business started by one of the great “builders” of the game of lacrosse, John Wesley Patterson. One of the most notable products that are still made there today is Patterson lacrosse sticks.

The Kilgour’s father, Richard, and their mother, Christine, helped to make those sticks at the factory – Richard would build the sticks while Christine would meticulously weave them. The littler Kilgour’s became accustomed to this factory at a very young age and would go on to spend ample time there helping out.

Not too long after Darris and Rich learned to run, skip and hop, they began playing lacrosse. The Kilgour’s ingratiated themselves in the Niagra-on-the-Lake lacrosse community playing both the box and field versions of the game throughout their pre-teen and high school years.

The Kilgour’s were then able to establish themselves as dominating and decorated forces for both the St. Catharine’s Athletics Jr. A lacrosse team, where they won a Minto Cup together in 1990, and then with the Sr. A. Six Nations Chiefs where they went on to win three Mann Cups in 1994, 95’ and 96’.

The idea of going on to play professional lacrosse couldn’t’ have been a future option for the Kilgour brothers as they worked their way through the Jr. ranks. The MILL was still in its infancy, and, at the time, there wasn’t a team in upstate New York or in the neighboring Ontario, Canada area either. That was, until 1992 when the Buffalo Bandits joined the league.

Taking a step back for a moment, when the brothers grew up around the Niagra-on-the-Lake lacrosse scene, they were fortunate enough to watch plenty of Jr. B Thunderhawks action and watched the Thunderhawks win the Jr. B Founder’s Cup in 1981. The coach of that championship team was Robert “Buff” McCready.

As fate would have it, just as Rich and Darris joined the MILL for the 1992 season, so did McCready. Under McCready, Rich and Darris and the rest of the star-studded Bandits would go on to win the MILL Champion’s Cup in the franchise’s inaugural season.

The brothers would win two more NLL titles playing together in the ’90s and then uniquely would win another championship together, but with Darris as head coach of the Bandits while Rich was still playing in 2008.

By 2010, both Darris and Rich had been enshrined to the exclusive NLL Hall of Fame. Including the Class of 2021’s ten inductees, the Kilgours are two of only 37 people that have earned the right to be in the hall.

Winning is never easy, although the Kilgour’s resume may make you think otherwise. What makes them different is that they put in the hours and hard work required to win and always looked to do what was best for the team.

“My dad always preached, ‘It’s a team sport, and you have to do what’s best for the team,’” Rich said. “So, if what was best for the team was for me to take a backseat on the offensive end, there were a lot of other things I could do on the floor.”

When you have played on teams that included legendary names such as John Tavares, Derek Keenan, Jim Veltman, Paul Day, Bob Hamley and Kevin Alexander, to name a few, finding any which way to contribute can be difficult, but they were always up for the challenge.

They were surrounded by winners, but it was their warrior spirit that they brought to every possession that made the opposition fearful when facing them, particularly Darris, who was known for his gritty, no-nonsense play.

“This is a warrior’s game,” Darris said. “Little brother of war, that’s the way you’re supposed to play. You play to honor those that have played before you, those who can’t and those that are going to play.”

Lacrosse has been a game that has always been a part of their lives. They’ve played it, coached it, helped make the equipment, and most importantly, they’ve taught successive generations the traditions and meanings of the game as only the Indigenous people who have owned this game for centuries can.

What had started as just a desire to play lacrosse because they had a passion for the game, turned into a teaching tool that could help younger generations learn about the sport and lessons for life as a whole.

Rich shared similar sentiments about how his experiences and successes throughout his career have positively affected the lives of others.

“I appreciate the fact that [Indigenous NLL players that came after us] might have said, ‘Hey, look at those Kilgour brothers. If those guys can play professional lacrosse – they’re native, I’m a native – so can I.’”

At the professional level, there weren’t Indigenous players that could help guide the Kilgour’s through their NLL journeys. Yet, as many younger players would attest too, the Kilgour’s have helped steer them, whether directly or indirectly, toward promising careers.

One of the many younger players that the Kilgour’s have impacted is a former first overall draft pick who became an NLL MVP and an NLL champion: Cody Jamieson.

Jamieson not only watched the Kilgour’s play lacrosse when he was growing up, but he’s also had the privilege to be coached by Darris, the younger Kilgour brother was leading the Jr. A Six Nations Arrows. Much like his playing career, Darris included a similar intensity to his coaching style. Jamieson says that he has tried to channel that level of grit into his play.

“Darris and Rich Kilgour had a huge influence on my game,” Jamieson said. “Growing up watching them play, seeing their tenacity and intensity, helped me develop that into my game.”

Jamieson’s feelings are likely echoed by hundreds, if not thousands, of former and current players, coaches and anyone else who has been part of the game since the Kilgour’s began their professional careers.

From the lacrosse stick factory to the arenas, the Kilgour’s have manufactured desirable career paths for themselves. Now, the Kilgour brothers are trying to allow future generations to have lacrosse change their lives just as it did for the two of them.